From the beginning: awakening writings 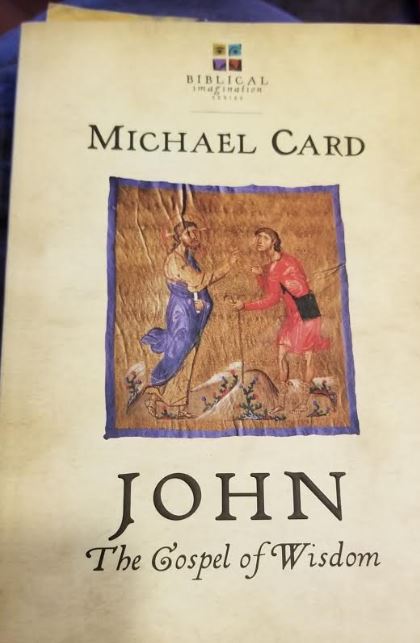 I really am enjoying my Gospel of John book by Michael Card, who tells us that John provides the “Gospel of Wisdom” – John’s recollections were written when he was in his 80’s – real stories he had retold for years – his own take and stories not in the other gospels… John knew his audience and how to tell a story with wisdom… he also was the closest to Jesus as a young teen… John was “the beloved one” who laid his head on Jesus’s chest, who took care of Mary, and was not killed like every other direct disciple of Jesus.

I don’t read these gospel accounts fast, I read them for steady learning, one verse then explanation at a time. I read the John 9 verses (and Michael Card’s explanation) TWICE, starting on page 117 about Jesus interacting with the blind man, placing mud on his eyes, “I was blind now I see”…   It’s a great story about how Jesus took so much time with just one individual…. That’s Jesus for you… cool…

What this story reminds me is of so many who just feel ostracized… that even when the community or the family or the rulers don’t understand us, Jesus specifically seeks us out, one by one. And Jesus introduces Himself to those He heals… I pray that folks do feel Jesus seeking them, especially when He is about to make a big change for them. I know Jesus looks for them (for us) in order to demonstrate the glory of God… it’s not about us, it’s about Him…. another aspect of the story that struck me is when the disciples asked: “Why Lord did this happen?” Jesus said it was so that the glory of God could be shown  – essentially each story can be used to show how God will see us thru trials, and so that we will credit Him when He does, because no one could know what deep repairs need to be done in us, only Him… Not everyone understands God or God’s plans,  but Jesus does want to work out the kinks for us… I know that… you know and trust that… I’m sure glad to witness in faith that Jesus works the kinks out of life for us…

Jesus also wants us to work on our issues too –  JESUS still needs us to WASH off our own MUD!

I trust God will work out the present sufferings for His Glory and our Joy… That’s not Pollyanna in me talking, or wishful thinking, that’s scripture! Romans 8:18… cool…

Jesus judges us to remove our blindness and He uses us to show His glory.

So, I got whacked in the eye yesterday by my purse strap that went loose. Was it to stop my loose tongue rattling on and on to the store clerk? Was it to remind me that accidents happen and not overthink it? Was it to NOW praise that I was OK, my vision saved, and I praised even thru the soreness… How could I not praise the big saves and simultaneously negate my small worries?

Negate small worries.  How dare we be blinded by what is small stuff compared to His Glory.

The blind man, in the Gospel of John, was kicked out of the temple but at that moment do you think he really worried about himself being ostracized? I would say no. He more couldn’t believe the others WOULDN’T believe that an apparent prophet healed him… and the blind man DID believe Jesus was from God, using both his logic and his heart. He was healed “in abstentia” while washing of the mud after leaving Jesus.  Actually, he met Jesus TWICE, once blind and once while seeing, he became Jesus’s disciple and ALL “that stuff” around him, all the ostracism FADED compared to THE GLORY OF KNOWING THE LORD.

The rulers, who could see, turned a blind eye to what they didn’t want to see. The blind man believed in whom he could not see. The belief came first.  How much better would we understand Jesus if we believed without seeing – if we do see, then let us not fall away from believing in His Glory coming for all. Let us not become double blind and forget.

Let us not be double blind too. Let us not let any present life “stuff” cloud our gifted sight of salvation, which is secured by our belief. Let all other things fade away. Let us BOTH see and feel the miracle of our healing and take an active role in it. Let us not miss the blessings of witness in others nor let us not be blinded by skepticism. Let us go from blinded to being bold for the Lord.

The LIGHT of the World is shining for the Message is to be seen.

As he went along, he saw a man blind from birth. His disciples asked him, “Rabbi, who sinned, this man or his parents, that he was born blind?”

“Neither this man nor his parents sinned,” said Jesus, “but this happened so that the works of God might be displayed in him. As long as it is day, we must do the works of him who sent me. Night is coming, when no one can work. While I am in the world, I am the light of the world.”

After saying this, he spit on the ground, made some mud with the saliva, and put it on the man’s eyes.  “Go,” he told him, “wash in the Pool of Siloam” (this word means “Sent”). So the man went and washed, and came home seeing.

His neighbors and those who had formerly seen him begging asked, “Isn’t this the same man who used to sit and beg?” Some claimed that he was. Others said, “No, he only looks like him.”

But he himself insisted, “I am the man.”

“How then were your eyes opened?” they asked.

He replied, “The man they call Jesus made some mud and put it on my eyes. He told me to go to Siloam and wash. So I went and washed, and then I could see.”

They brought to the Pharisees the man who had been blind. Now the day on which Jesus had made the mud and opened the man’s eyes was a Sabbath. Therefore the Pharisees also asked him how he had received his sight. “He put mud on my eyes,” the man replied, “and I washed, and now I see.”

Some of the Pharisees said, “This man is not from God, for he does not keep the Sabbath.”

But others asked, “How can a sinner perform such signs?” So they were divided. Then they turned again to the blind man, “What have you to say about him? It was your eyes he opened.”

The man replied, “He is a prophet.” They still did not believe that he had been blind and had received his sight until they sent for the man’s parents. “Is this your son?” they asked. “Is this the one you say was born blind? How is it that now he can see?”

“We know he is our son,” the parents answered, “and we know he was born blind. But how he can see now, or who opened his eyes, we don’t know. Ask him. He is of age; he will speak for himself.” His parents said this because they were afraid of the Jewish leaders, who already had decided that anyone who acknowledged that Jesus was the Messiah would be put out of the synagogue. That was why his parents said, “He is of age; ask him.”

A second time they summoned the man who had been blind. “Give glory to God by telling the truth,” they said. “We know this man is a sinner.”

He replied, “Whether he is a sinner or not, I don’t know. One thing I do know. I was blind but now I see!”

Then they asked him, “What did he do to you? How did he open your eyes?”

He answered, “I have told you already and you did not listen. Why do you want to hear it again? Do you want to become his disciples too?”

Then they hurled insults at him and said, “You are this fellow’s disciple! We are disciples of Moses! We know that God spoke to Moses, but as for this fellow, we don’t even know where he comes from.”

The man answered, “Now that is remarkable! You don’t know where he comes from, yet he opened my eyes. We know that God does not listen to sinners. He listens to the godly person who does his will. Nobody has ever heard of opening the eyes of a man born blind. If this man were not from God, he could do nothing.”

To this they replied, “You were steeped in sin at birth; how dare you lecture us!” And they threw him out.

35 Jesus heard that they had thrown him out, and when he found him, he said, “Do you believe in the Son of Man?”

Jesus said, “You have now seen him; in fact, he is the one speaking with you.”

Then the man said, “Lord, I believe,” and he worshiped him.

Jesus said, “For judgment I have come into this world, so that the blind will see and those who see will become blind.”

Some Pharisees who were with him heard him say this and asked, “What? Are we blind too?”

Jesus said, “If you were blind, you would not be guilty of sin; but now that you claim you can see, your guilt remains.

We know that the whole creation has been groaning as in the pains of childbirth right up to the present time. Not only so, but we ourselves, who have the firstfruits of the Spirit, groan inwardly as we wait eagerly for our adoption to sonship, the redemption of our bodies. For in this hope we were saved. But hope that is seen is no hope at all. Who hopes for what they already have? But if we hope for what we do not yet have, we wait for it patiently.

In the same way, the Spirit helps us in our weakness. We do not know what we ought to pray for, but the Spirit himself intercedes for us through wordless groans. And he who searches our hearts knows the mind of the Spirit, because the Spirit intercedes for God’s people in accordance with the will of God.

And we know that in all things God works for the good of those who love him, who have been called according to his purpose. For those God foreknew he also predestined to be conformed to the image of his Son, that he might be the firstborn among many brothers and sisters. And those he predestined, he also called; those he called, he also justified; those he justified, he also glorified.

What, then, shall we say in response to these things?

If God is for us, who can be against us?